Afghanistan is often in the news for the wrong reasons such as large swathes of migrants on European shores, armed conflicts, loss of life etc. However it is possible that the country might actually be implementing one of the most innovative energy services projects which has just started implementation with support from the STEPs team.

Afghan households use a Tandoor, a traditional cylindrical clay or metal oven for cooking and baking an efficient version of which is shown in the Fig. It is reported that 90% of cooking revolves around making bread called Naan, followed by potatoes. Houses also use a Bukhari, a traditional space heater for heating the living spaces in winter. Some of the traditional houses also have a Tawa Khana which circulates the hot combustion gases from the tandoor under the floor of the living room and releases to the outside through the opposite wall.

Households in Afghanistan use firewood, animal dung cakes, charcoal and shrubs for heating and cooking. Traditionally firewood and charcoal were purchased in rural Afghanistan but increasingly shrubs and animal dung cakes also have to be purchased. The thermal energy use of solid fuels also have their serious health effects, the annual number of pre-mature deaths from indoor-air pollution is estimated to be 54,000/Year (WHO, 2009). In comparison the civilian casualties in 2015 from the armed conflict in Afghanistan was 11,002 (UNAMA, 2016). The use of solid fuels are also a financial strain on the Afghan households as the average rural Afghan household spends over $ 90 on fuels of which only 12% is on kerosene/lighting with 88% on thermal energy. The prices of the solid fuels also increase by 15-25% during winter months as well. 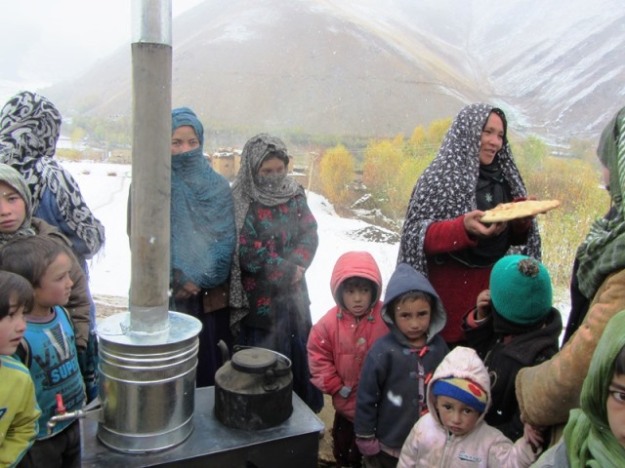 Since late 2013, since the inception of the STEPs project, till late 2015, Sustainable Energy Associates (SEA), one of the partners have been working with the Ministry for Rural Reconstruction and Development (MRRD) in Afghanistan and UNDP to develop a project to address these rural energy and thermal energy challenges. These efforts have led to development of a new programme – Afghanistan Sustainable Energy for Rural Development (ASERD) which has business model and financial innovation at the core of the programme design and was finalised by SEA in late 2015. The project agreement was signed by MRRD and UNDP in late December 2015 and will be financed by the governments of South Korea and Sweden. The project will have a financial outlay of over US$ 50 million and will be implemented over 4 years during the period 2016-2019.

The ASERD programme plans to establish sustainable rural energy services in 194 rural communities in 4 years, providing both electrical and thermal energy services. The efforts will bring sustainable energy to over 19,500 households providing health, economic and social benefits. However the major contribution the programme will make to rural energy in Afghanistan would be to establish delivery models that are technology neutral, leverage additional local and international resources, mobilise communities, engage the private sector and financiers to establish a self-sustaining delivery model. The thermal energy service model which will be used by ASERD is shown in Fig.1.

Past rural energy programmes in Afghanistan have mainly relied on technology driven approaches which have focused on commissioning electricity generating equipment and transferring ownership, operation and utility management responsibilities to the communities. These efforts have also largely ignored the cooking and heating needs of rural population in a country which has cold winters. The opportunities to go beyond household energy to commercial, enterprise and public service use of energy have not been exploited or capitalised effectively. Similarly private sector and financial institutions have only played a limited role in the programme so far and the aspects of policy, regulation, standards and incentive frameworks have also not received considerable attention.

Against this backdrop, the ASERD programme seeks to graduate from the current approach to establish a technology-neutral, sustainable service delivery arrangement to provide thermal and electrical energy in rural areas of Afghanistan for household, social and productive needs. The programme will also provide energy in rural areas to seek agriculture productivity gains, rural enterprise development, income generation, community social empowerment and cohesion as well as to expand public service to improve access to better health, education and security in rural areas. To deliver these services in rural areas in a sustainable manner the programme will seek to engage the national utility and the private sector in addition to community mobilisation.

The programme will also develop capacities of the government agencies, civil society and the, private sector including the financial sector. ASERD will also create frameworks for policy and regulation, testing and quality assurance as well as will also pilot seven innovative energy service delivery models which will leverage skillsets and resources from communities, private sector and financial institutions some of which are linked to global financing mechanisms for climate change and energy. These models will also result in benefits to women and the marginalised nomadic Kuchi communities.

The design of ASERD has benefited from the learnings on thermal energy services offerings, key challenges and solutions gained by the STEPs project team which will now be used to support about 20,000 families in Afghanistan. SEA will be involved during the implementation of ASERD to support MRRD and UNDP.

The STEPs research project explores the relative benefits and dis-benefits of larger centralised biogas systems at a village scale versus smaller family-scale systems. It also investigates the economic and financing factors (centralisation brings economies of scale but can only really be implemented by organisations/governments, family-scale systems may be out of reach of user capital without financing arrangements), environmental factors, and social and behavioural considerations (do users want to collectively cook, issues with economics of pipe gas supply meaning necessity of group facilities etc) inherent in biodigester development.

Biogas digesters can be a valuable solution to providing thermal energy services to rural and urban households in the developing world. The technology is particularly applicable in rural areas, where access to feed stock for the digesting chamber in the form of agricultural wastes and other organic wastes is greater. In general, digesters fall into two broad categories: household-scale biodigesters, and larger, centralised biodigesters.

Household-scale biodigesters are often seen as the most viable option for rural communities and households. These are generally small, with digesting chambers of volumes in the 4 to 13 cubic metres range. These installations will support the cooking needs of a rural household, as well as providing biogas for heating or lighting if required. Tailoring the size of the biogas system to the availability of feedstock for the household is critical for successful functioning of the system: studies have suggested 4-6 heads of cattle is a sustainable target if using agricultural wastes for feedstock, for an average-sized family of five. Individual biodigesters can produce sufficient gas for a single person on as little as 1 kg/day of feedstock.[2]

However, one of the primary limiting factors in the adoption of household biodigesters is financing and end-user capital constraints. Household-scale systems are still relatively expensive for the majority of rural developing-world users, and experience has shown that without the provision of credit facilities in biodigester programs, or government subsidies, adoption rates remain low.

Centralised biodigester systems offer a different set of benefits and challenges. Economies of scale are the major advantage: one centralised system can serve a medium-scale settlement or several small settlements, with a reduced burden for upfront capital costs and maintenance compared to the same service with household-scale systems, in the range of US$100 – 500 per household. The Chinese National Biogas Program [which will be the subject of a later blog in this series], has been the major implementer of centralised systems, however experience also exists in other South-East Asian countries. Examples of this can be found in the centralised digesters built near Beijing to service rural villages. For an upfront cost of ~US$1 million, 1900 households are serviced through each centralised digester, with biogas available at a 20% discount compared to market LPG prices, and the additional benefit of organic effluent being made available for sale to the local farms feeding the digester.[2] The major constraint, however, to wider dissemination of centralised systems is the significantly higher up-front capital costs. This puts the systems out of reach for private users in the majority of cases, government-scale implementation is more common.

Socio-political conditions are another factor that has proved a constraint in biogas implementation projects in developing countries. Centralised biogas digesters can have difficulty with biogas supply to end-users, particularly given the poor economics of installing piped gas supply in small rural communities. Communal cooking facilities have been a solution to this problem in theory, however experience from India suggests that collective cooking is not desired by the rural population, and this has impacted upon the success of centralised digester installations. As with dissemination programs for clean cookstoves, biogas installations need to take into account the end-users needs and desires in design and installation for product use and performance.

The other posts in this series will cover the question of why biogas hasn’t succeeded in Sub-Saharan Africa as it has in South-East Asia, the maintenance question for biogas services, and lessons from the Chinese National Biogas Program.