This blog aims to describe in brief the history of China’s national biogas program and its transition phases in both the 1980s (moving to prefabricated plastic digesters) and more recently in promoting household scale systems, as well as how this program compares to other government-scale programs in household and centralised biodigesters. [1] [2] [3]

The Chinese National Biogas Program is one of the most cited examples of a successful biogas dissemination program at a government scale. The first biodigesters started appearing in China in the 1920s, and from the 1970s onwards the government began introducing household-scale centralised biodigester systems for rural communities under the predecessor of the current program. The first major transition in the program took place in the 1980s. Previously to this, most biodigesters in the country were constructed on-site from brick or concrete, however this period saw the introduction of what are known in the country as “commercialised digesters”. This covers three constructions of prefabricated biodigesters. Fibreglass-reinforced plastic (FRP) digesters began appearing in the 1980s themselves, whilst so-called plastic soft (PS) and plastic hard (PH) digesters came into the market in the mid-90s. These digesters offered significant commercial and operational advantages, being able to be constructed at a central site and then disseminated, as well as being more reliable, having lower maintenance requirements and a better performance overall.

As of 2011, 41.68 million households were using biogas services through the National Biogas Program. As of 2010 production capacity for the three previously-described prefabricated digester types was approximately 2,500,000 per year, and as of 2014, approximately 50 million households had been reached with biogas supply, using over 16 million cubic metres of biogas per year [4]. At least one prefabricated digester manufacturer exists in each Chinese province, over 100 in total. These digesters are also marketed across South-East Asia, and also recently to Sub-Saharan Africa.

However, there exist a number of present challenges to the continued development of the Program. Current funding for biogas digester construction predominantly comes from state, regional and government sources in the form of a subsidy for rural households. Rural households are expected to contribute, but this varies widely from just the labour costs, to 50-70% of the total installation costs. Some funding criteria stipulated by the government also exclude large proportions of the rural population: for a village to qualify for biodigester subsidies for example, at least 70% of the households must own sufficient livestock. This funding regime, as it exists, makes no provision for servicing and maintenance, and whilst biogas service cooperatives are beginning to appear in rural areas, no effort has been made to assess the current proportion of functioning digesters nor repair any identified non-functioning systems at a local government level.

Possibly the largest constraint to the continued operation and growth of the program is internal migration in China. The rural population is falling significantly as urban development continues, with huge number of rural people moving to urban areas for greater employment prospects and wages. This also contributes to biodigester effectiveness; with traditional animal husbandry industries giving way to larger, centralised livestock farming, feedstock regimes are decreasing in suitability in rural China for household-scale digesters, presenting an ongoing constraint to the operation of the program.

The STEPs research project explores the relative benefits and dis-benefits of larger centralised biogas systems at a village scale versus smaller family-scale systems. It also investigates the economic and financing factors (centralisation brings economies of scale but can only really be implemented by organisations/governments, family-scale systems may be out of reach of user capital without financing arrangements), environmental factors, and social and behavioural considerations (do users want to collectively cook, issues with economics of pipe gas supply meaning necessity of group facilities etc) inherent in biodigester development.

Biogas digesters can be a valuable solution to providing thermal energy services to rural and urban households in the developing world. The technology is particularly applicable in rural areas, where access to feed stock for the digesting chamber in the form of agricultural wastes and other organic wastes is greater. In general, digesters fall into two broad categories: household-scale biodigesters, and larger, centralised biodigesters. 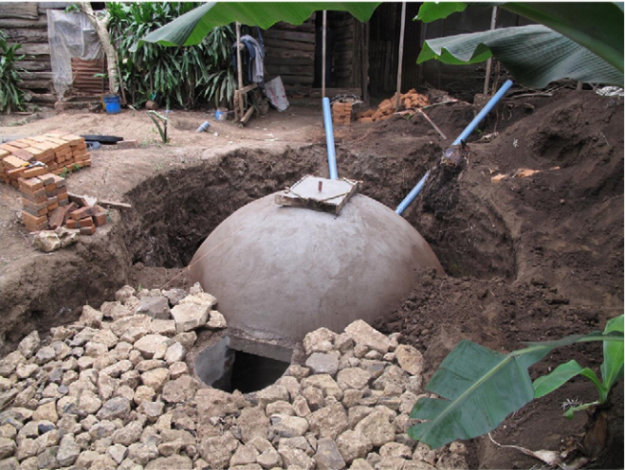 Household-scale biodigesters are often seen as the most viable option for rural communities and households. These are generally small, with digesting chambers of volumes in the 4 to 13 cubic metres range. These installations will support the cooking needs of a rural household, as well as providing biogas for heating or lighting if required. Tailoring the size of the biogas system to the availability of feedstock for the household is critical for successful functioning of the system: studies have suggested 4-6 heads of cattle is a sustainable target if using agricultural wastes for feedstock, for an average-sized family of five. Individual biodigesters can produce sufficient gas for a single person on as little as 1 kg/day of feedstock.[2]

However, one of the primary limiting factors in the adoption of household biodigesters is financing and end-user capital constraints. Household-scale systems are still relatively expensive for the majority of rural developing-world users, and experience has shown that without the provision of credit facilities in biodigester programs, or government subsidies, adoption rates remain low.

Centralised biodigester systems offer a different set of benefits and challenges. Economies of scale are the major advantage: one centralised system can serve a medium-scale settlement or several small settlements, with a reduced burden for upfront capital costs and maintenance compared to the same service with household-scale systems, in the range of US$100 – 500 per household. The Chinese National Biogas Program [which will be the subject of a later blog in this series], has been the major implementer of centralised systems, however experience also exists in other South-East Asian countries. Examples of this can be found in the centralised digesters built near Beijing to service rural villages. For an upfront cost of ~US$1 million, 1900 households are serviced through each centralised digester, with biogas available at a 20% discount compared to market LPG prices, and the additional benefit of organic effluent being made available for sale to the local farms feeding the digester.[2] The major constraint, however, to wider dissemination of centralised systems is the significantly higher up-front capital costs. This puts the systems out of reach for private users in the majority of cases, government-scale implementation is more common.

Socio-political conditions are another factor that has proved a constraint in biogas implementation projects in developing countries. Centralised biogas digesters can have difficulty with biogas supply to end-users, particularly given the poor economics of installing piped gas supply in small rural communities. Communal cooking facilities have been a solution to this problem in theory, however experience from India suggests that collective cooking is not desired by the rural population, and this has impacted upon the success of centralised digester installations. As with dissemination programs for clean cookstoves, biogas installations need to take into account the end-users needs and desires in design and installation for product use and performance.

The other posts in this series will cover the question of why biogas hasn’t succeeded in Sub-Saharan Africa as it has in South-East Asia, the maintenance question for biogas services, and lessons from the Chinese National Biogas Program.