This blog aims to describe in brief the history of China’s national biogas program and its transition phases in both the 1980s (moving to prefabricated plastic digesters) and more recently in promoting household scale systems, as well as how this program compares to other government-scale programs in household and centralised biodigesters. [1] [2] [3]

The Chinese National Biogas Program is one of the most cited examples of a successful biogas dissemination program at a government scale. The first biodigesters started appearing in China in the 1920s, and from the 1970s onwards the government began introducing household-scale centralised biodigester systems for rural communities under the predecessor of the current program. The first major transition in the program took place in the 1980s. Previously to this, most biodigesters in the country were constructed on-site from brick or concrete, however this period saw the introduction of what are known in the country as “commercialised digesters”. This covers three constructions of prefabricated biodigesters. Fibreglass-reinforced plastic (FRP) digesters began appearing in the 1980s themselves, whilst so-called plastic soft (PS) and plastic hard (PH) digesters came into the market in the mid-90s. These digesters offered significant commercial and operational advantages, being able to be constructed at a central site and then disseminated, as well as being more reliable, having lower maintenance requirements and a better performance overall. 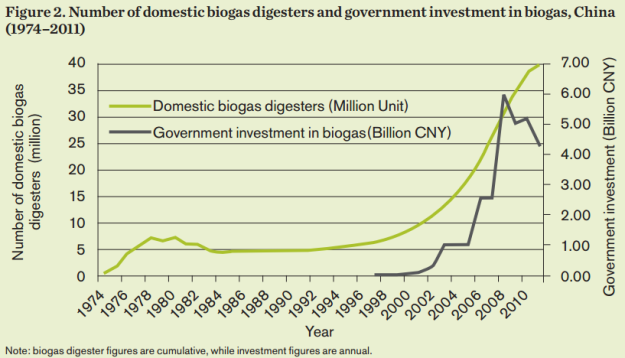 As of 2011, 41.68 million households were using biogas services through the National Biogas Program. As of 2010 production capacity for the three previously-described prefabricated digester types was approximately 2,500,000 per year, and as of 2014, approximately 50 million households had been reached with biogas supply, using over 16 million cubic metres of biogas per year [4]. At least one prefabricated digester manufacturer exists in each Chinese province, over 100 in total. These digesters are also marketed across South-East Asia, and also recently to Sub-Saharan Africa.

However, there exist a number of present challenges to the continued development of the Program. Current funding for biogas digester construction predominantly comes from state, regional and government sources in the form of a subsidy for rural households. Rural households are expected to contribute, but this varies widely from just the labour costs, to 50-70% of the total installation costs. Some funding criteria stipulated by the government also exclude large proportions of the rural population: for a village to qualify for biodigester subsidies for example, at least 70% of the households must own sufficient livestock. This funding regime, as it exists, makes no provision for servicing and maintenance, and whilst biogas service cooperatives are beginning to appear in rural areas, no effort has been made to assess the current proportion of functioning digesters nor repair any identified non-functioning systems at a local government level.

Possibly the largest constraint to the continued operation and growth of the program is internal migration in China. The rural population is falling significantly as urban development continues, with huge number of rural people moving to urban areas for greater employment prospects and wages. This also contributes to biodigester effectiveness; with traditional animal husbandry industries giving way to larger, centralised livestock farming, feedstock regimes are decreasing in suitability in rural China for household-scale digesters, presenting an ongoing constraint to the operation of the program.

Even in the presence of mandated service agreements maintenance for biodigesters can still be an issue. For example, time constraints on private contractors [1] from central government to install and maintain digesters, lead to a slipping in maintenance standards. In a village in Assam interviewed in the paper, no follow up visits from the contractors were had for four years, and a 20% digester failure rate was recorded. Communications issues were a key contributor to this: the fact that a provision of a half of the installation subsidy for maintenance of plants over 5 years old was not communicated to households or the contractors. 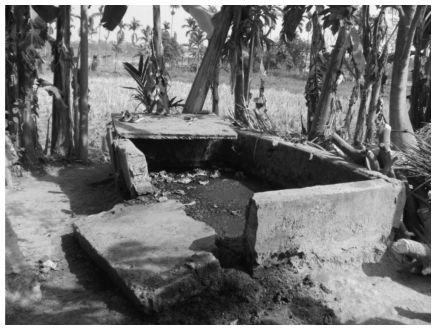 A broken biodigester in Assam, India, having not been repaired for 6 months. Source: Raha, Mahanta & Clarke (2014) The implementation of decentralised biogas plants in Assam, NE India: The impact and effectiveness of the National Biogas and Manure Management Programme. http://dx.doi.org/ 10.1016/j.enpol.2013.12.048

One of the more overlooked aspects of biogas digester services and operation is the maintenance requirements of digesters. Older digester designs (for example dome-type biodigesters constructed from brick or earth) require a regular maintenance schedule (monthly to quarterly is common) [2] in order to maintain best performance, including maintaining the chemical balance of the digesting chamber and its structural integrity, repairing cracks in the chamber if necessary. More modern household and collective-scale designs are based off a plastic digesting chamber, usually fibreglass-reinforced plastic (FRP), and as such require less intensive maintenance (annual maintenance visits are sufficient), but still have a maintenance burden to address for peak performance (for example, maintaining the chemical balance of the digester through appropriate feedstock insertion).

However, even in the presence of mandated service agreements for biodigesters, for example delivered through a fee-for-service energy service company (ESCO), maintenance can be overlooked. A useful case study illustrating this can be obtained from India’s National Biogas and Manure Management Program (NBMMP) [1]. The NBMMP relied on local governments in India contracting the private construction sector to construct biogas digesters for rural communities. Time constraints on these contractors on installation, stemming from the prevailing climatic conditions limiting the working period of the year due to monsoons, meant that maintenance standards, for which the contractors under the tender from local government were also responsible, and the overall quality of installation of digesters, slipped drastically. Some contractors reported having to fill an annual allocation of 6,000 digester installations in just three months, at a rate of over 60 digesters per day, often for small companies of just 5-10 technicians. Hence, some digesters were not being maintained for four years or more, and there was a 20% overall digester failure rate. Communication between the public bodies and private contractors was also an issue: the NBMMP made provision of half the subsidy granted to households for purchasing digesters as a maintenance grant over a five-year period, which was barely taken advantage of due to a lack of awareness on the part of households and contractors.

This case study makes clear the necessity of accounting for maintenance arrangements in the design of any biodigester business plan or program. Ensuring the maintenance schedule is followed will extend the life of the biodigester and improve its performance, resulting in greater satisfaction with the system from the point-of-view of end-users. This fact makes biodigesters particularly suited to a fee-for-service business model: regular maintenance can easily be combined with regular payment collection visits, reducing the cost burden on the company/organisation and improving service.

The final post in this series will focus on the recent evolution of the Chinese National Biogas Program, and the lessons to be learned for cross-application in other regions globally.